Traveling to Scotland from London with a Dog

The requirements for a getaway after a solid ten week heatwave in England were: going to a cooler temperature, international and a place we’d never been before. Thoughts of crossing to Europe with a potential driver who didn’t use air conditioning along with a heat sensitive dog for seven hours, ruled that out as a destination.

Lacking the £1750 for each of us to fly from the UK to Cinque Terre via Victor Private Jets, Scotland soon became the destination. Asking locals @stitchandalbie and @theworldaccordingtoharris for advice, combined with the lack of a driver’s license due to a recent robbery, I got to planning.

Trains from London to Scotland

Scotland has a lot to offer from The Highlands to the train options. Train choices were the sleeper train to the Highlands or Edinburgh at a hefty cost of £195-210 one-way for the time period I was traveling, including an additional £30 dog fee. The famous sleeper car does not include a private loo, nor is there a shower aboard — however new trains “are coming” that will afford both luxuries and even offer a double bed. Taking the virtual tour gave me even more pause.

Traveling with a dog brings into consideration many factors. For us temperature and travel time factors into every decision, particularly with a French Bulldog. While it’s great to travel with your best friend, food, local vet and comfort can lead to limited selections and higher prices.

The health of your dog and their temperament means you may bring them, but should you?

In this case, Elle does well on trains but eight hours is a long time and not necessary when there are shorter rides available. It seemed odd to me to have a sleeper train route through the national park, if it’s too dark to see it.

A train from London to Edinburgh can clock in under four and a half hours. LNER bought our Virgin Trains for Scotland. When traveling with your dog, I recommend the quiet car. There is still low talking, but it’s a much calmer environment than the general cars. Seatfrog is an upgrade bidding app letting users upgrade the day of your journey. I won a bid for £19 instead of £60 for a first class ticket, but let it go as the train was fairly empty.

Trains have restrooms, a dining cart, WiFi and dogs travel for no extra charge. The trains pull out of St. Pancreas International Station. Harry Potter fans can delight by arriving early to queue for a photo at Platform 9 & ¾ complete with Potter’s owl Hedwig and a small shop to load up on Potter delights.

Edinburgh is home to the beloved writer, J.K. Rowling. She wrote many of the novels in cafes around town, borrowed names from gravestones and any Potterhead will discover the streets that inspired Diagon Alley and many other Potter locations, making the city a treasure to explore.

Getting around Edinburgh by foot with a dog is easy, however if there are festivals on, crowds can cause major delays, as Edinburgh has many one way streets. Tram and bus are the easiest way to zip around the city with day passes available for a few pounds.

To get to other cities, the best bet is to rent a car. To give you an idea, Castle Craigievar, completed in 1626, is a pink castle six miles from Aberdeen. 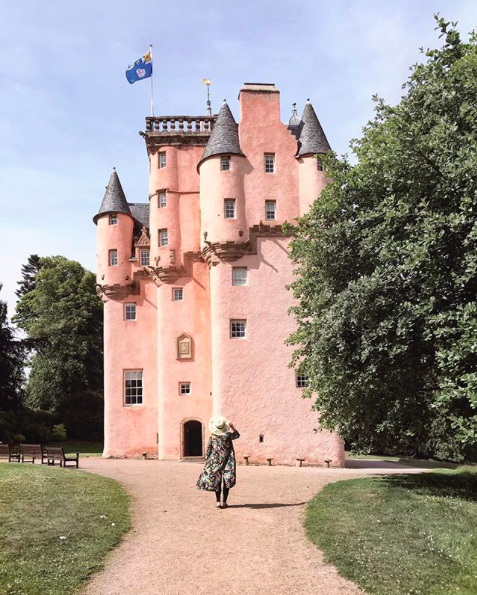 Rumored to have been the inspiration for Cinderella’s Castle at Disneyland. It was crossed off my list when I checked the public transport would take 2 hours each way or a hire car — if you could find one to get you there — would cost between 50-70 pounds. A rental car would be best to get to this dog-friendly destination.

One final tip, at any time of year, it’s best to bring rain protection or you could get caught out like model and environmentalist Kirstie Brittain and boyfriend James McVey of The Vamps: 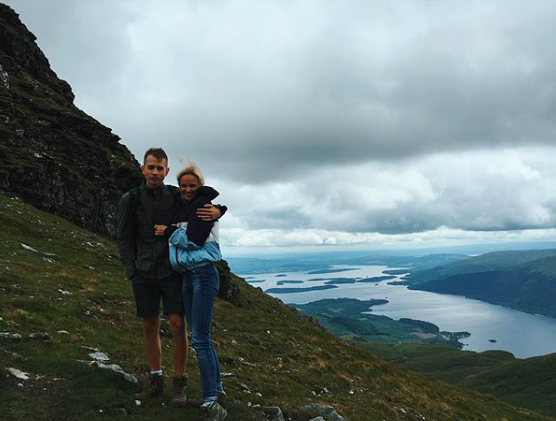 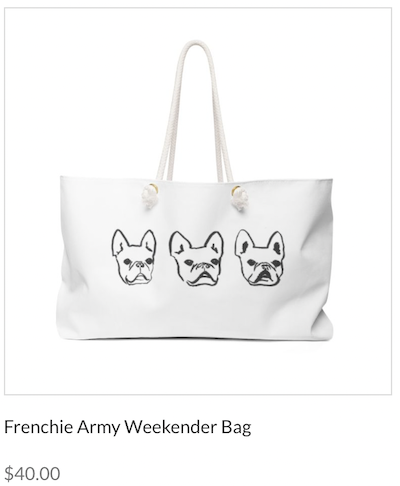