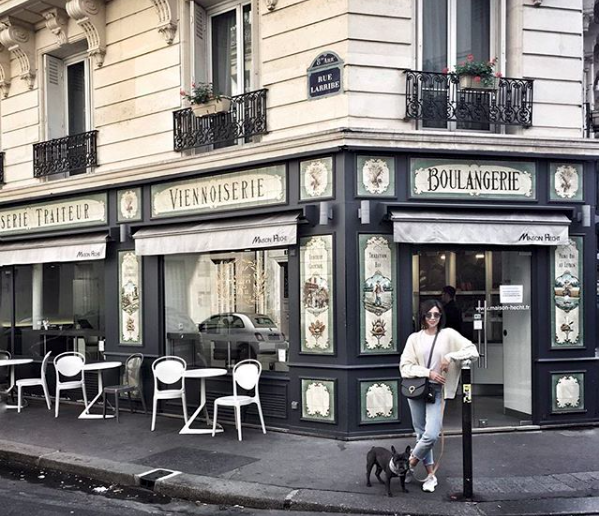 If you saw that instagram handle, wouldn’t you be intrigued and quickly follow too? And a frenchie, no less! I met Jeni @parisandpups in person last year (or it could have been 2017; Jeni? lol) in Paris and we immediately bonded over our love of kimchi (she’s half korean!), design, travel and of course, frenchies.
She is just as lovely in person as she is online. Her writing style and stories just drift you away into a little corner brasserie in Paris or tinkering away at home in your own quaint Parisian pied-à-terre.
Jeni, her husband and their french bulldog Lafayette moved to their beautiful Parisian apartment from California five years ago. Naturally, I was curious what differences there are between the two cultures. Jeni says she’s always redesigning and moving things around–I guess that’s the plight of a creative! Never truly satisfied and always more to be done. 🙂
So, let’s get on with the questions and dreamy photos! 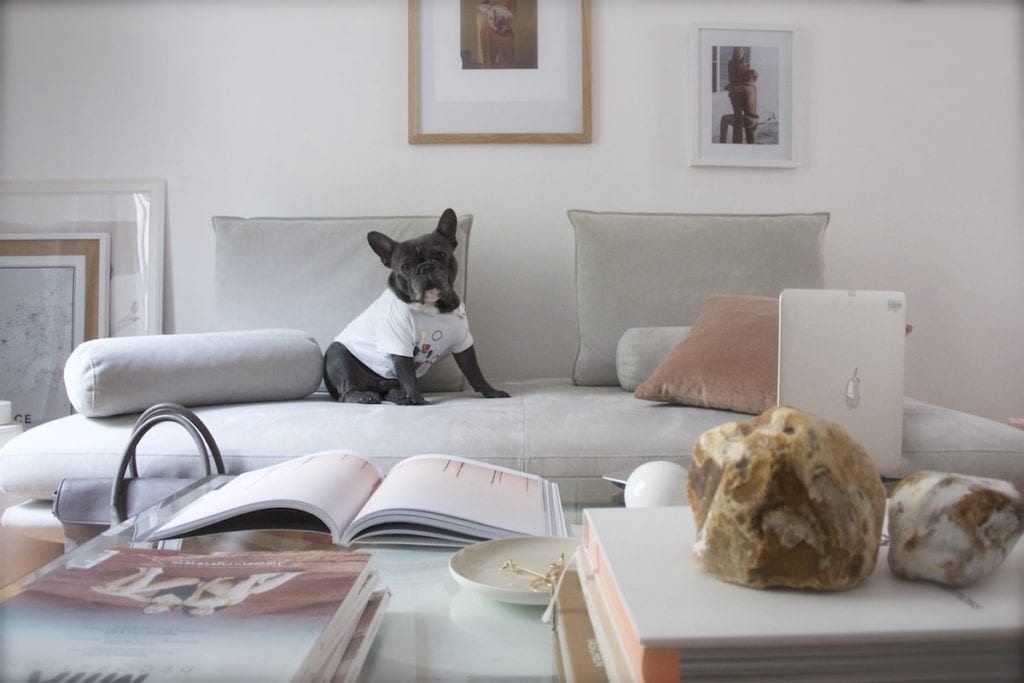 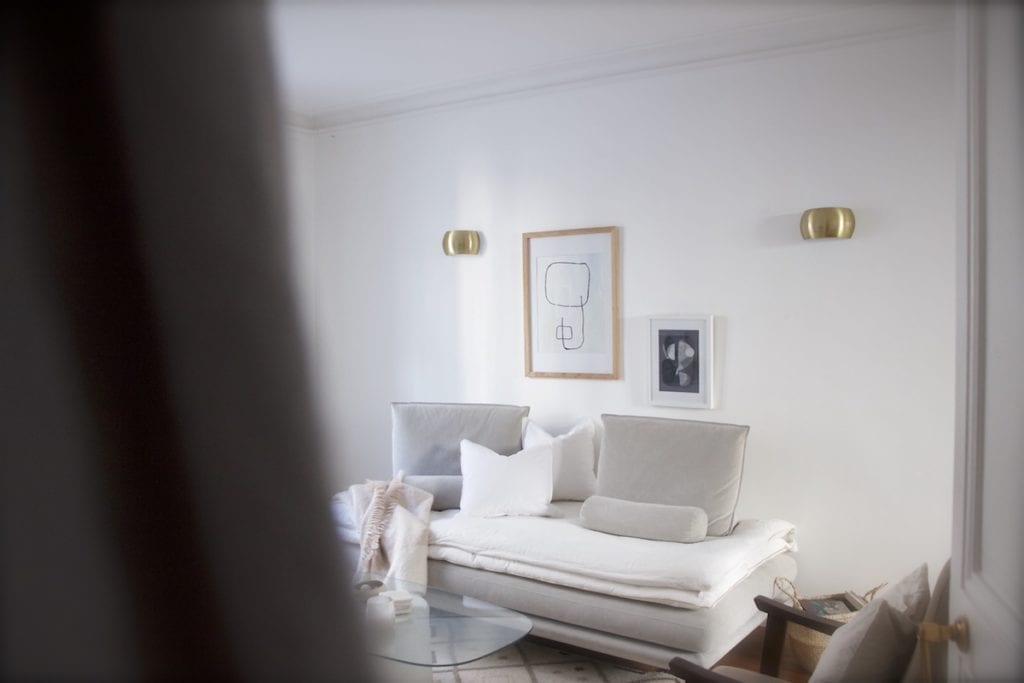 How has living in Paris influenced your design choices?

Living in Paris hasn’t really influenced my design choices but its because I live in Paris that I’ve learned to adore the typical Haussmannien exteriors and interiors my former modern-self never appreciated before. The perfectly lined rows of buildings designed with chevron parquet floors, marble fireplaces under baroque mirrors and all that bright white cornice and molding! Oh la la! 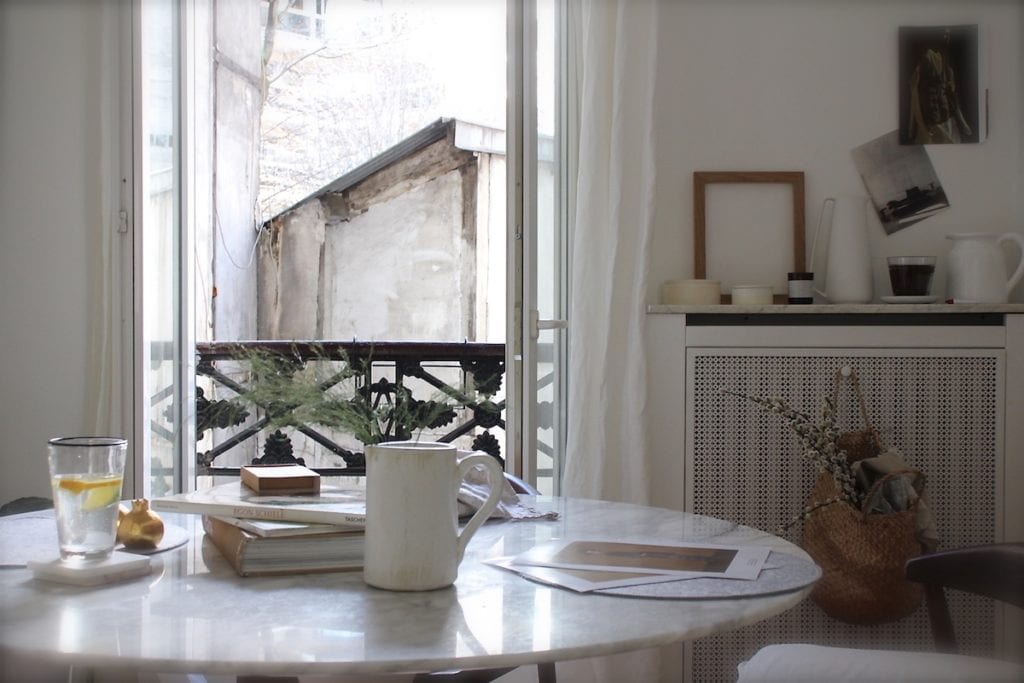 Have you given your apartment “french accents?”

We have one antique French mirror we found while in the south of France that apparently dates back to the early 19th cicle. We plan on a couple additions such adding cornicing on our ceilings and rectangle wall paneling which is typical of the quintessential Parisian apartment we’ve all seen.

Our building dates back to 1910 and we were told that our doors and brass hardware are original to that time. I don’t have the heart to change them even though the doors don’t close all the way or hardware no longer works. So by keeping those original features, I feel that the original “French accents” remain in place. We also selected antique gold elements such as the kitchen/bathroom sink which is sort-of Parisienne and fits in with the time period of this apartment. 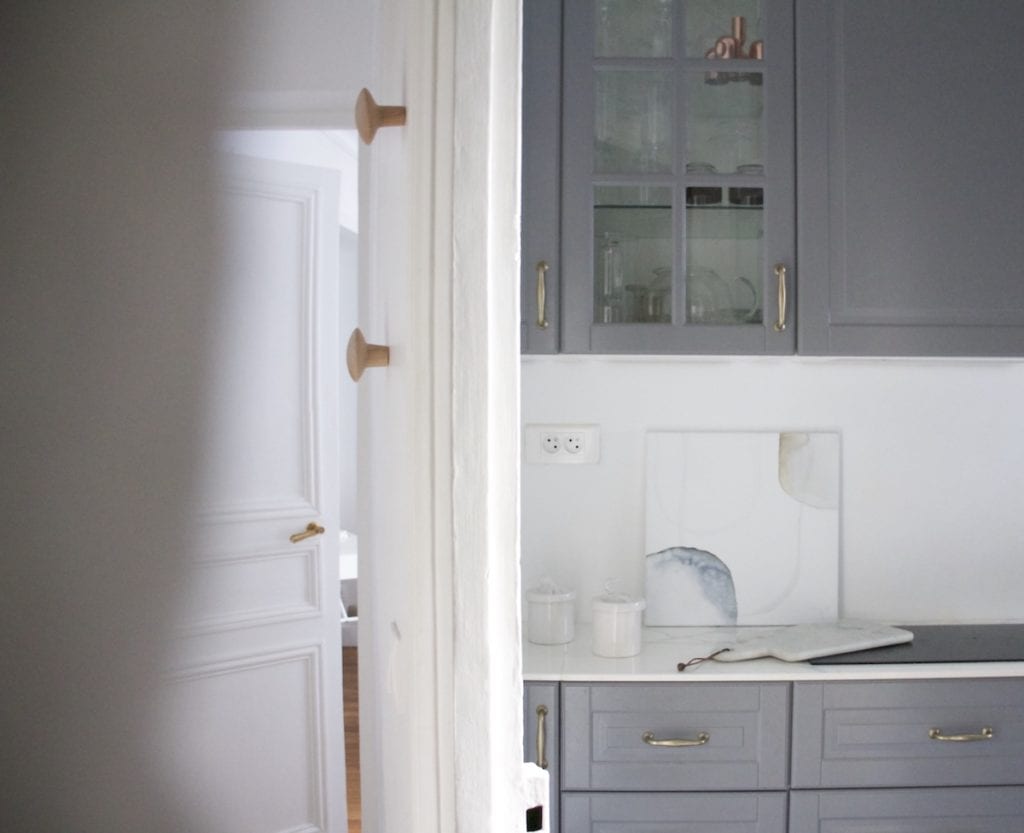 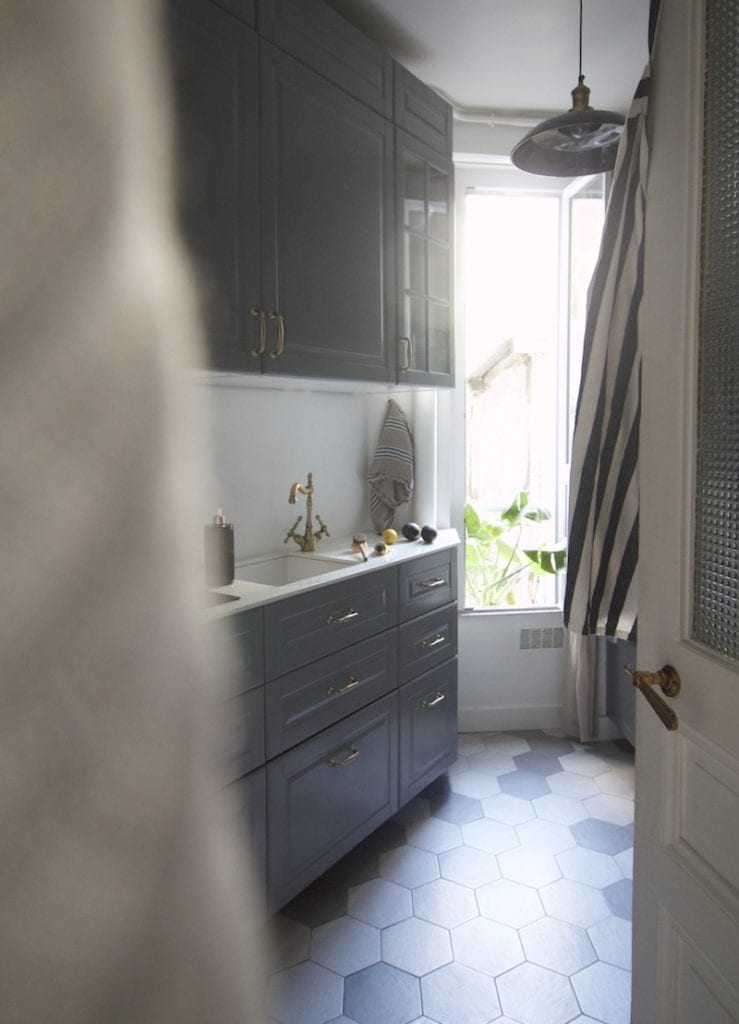 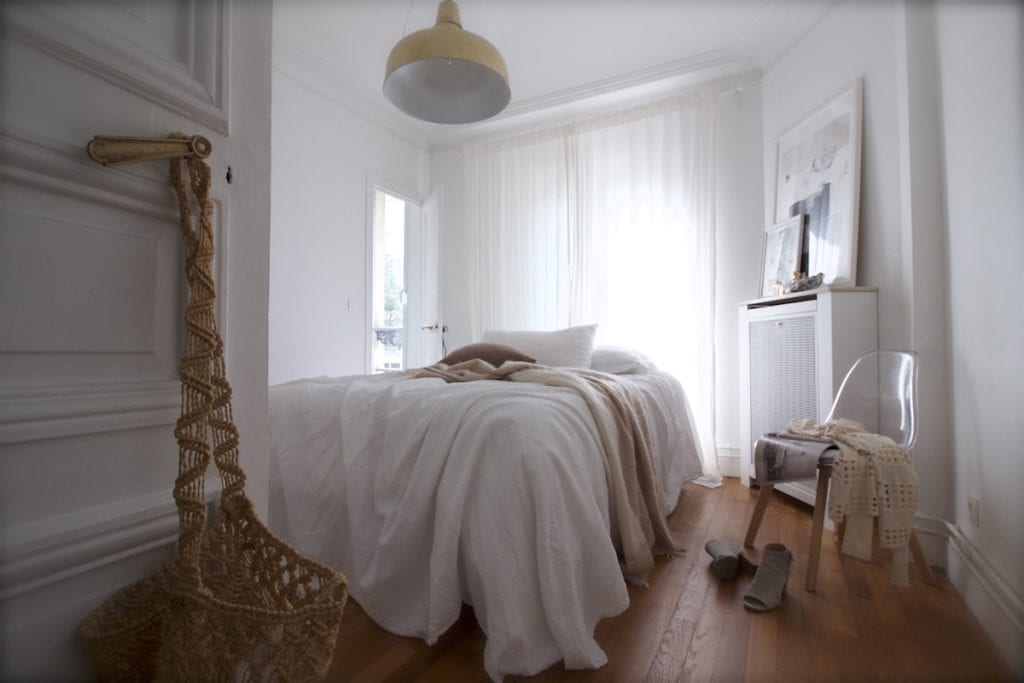 What characteristics of Parisian apartments differ from American?

Oh where do I start! I think the most notable difference is the compartmented floor plans. Although the open-concept living is becoming increasingly popular, compartmentalized layouts are the norm. Each room is dedicated or closed off as it’s own separate and privately functioning room. I don’t know what I’d do if I had to go back to living in a space where my toilet was in the same room as my bath/shower. 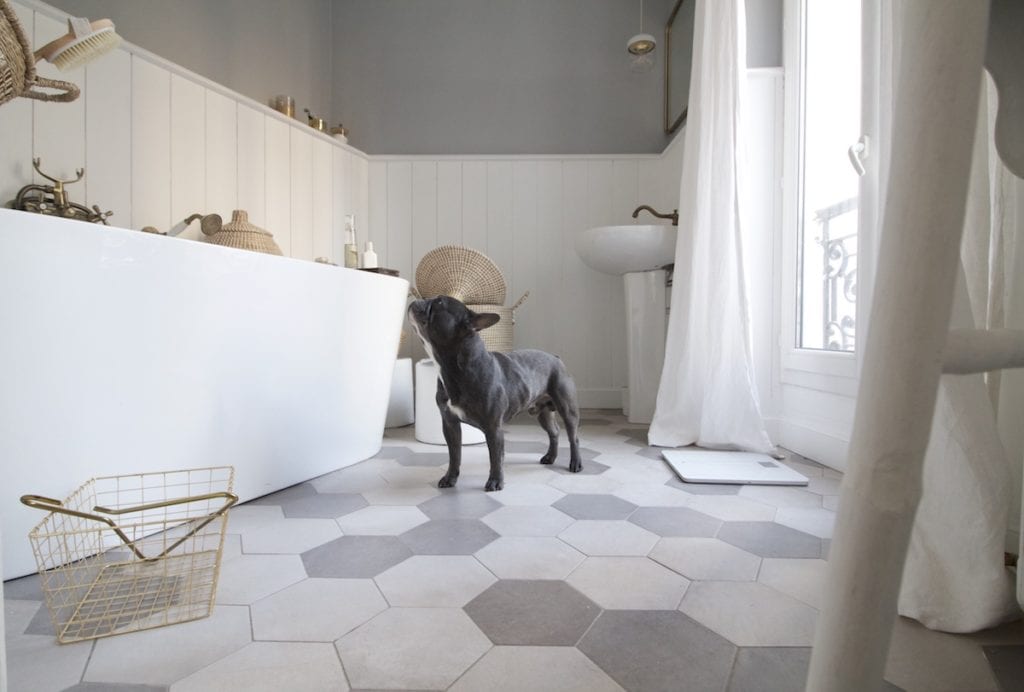 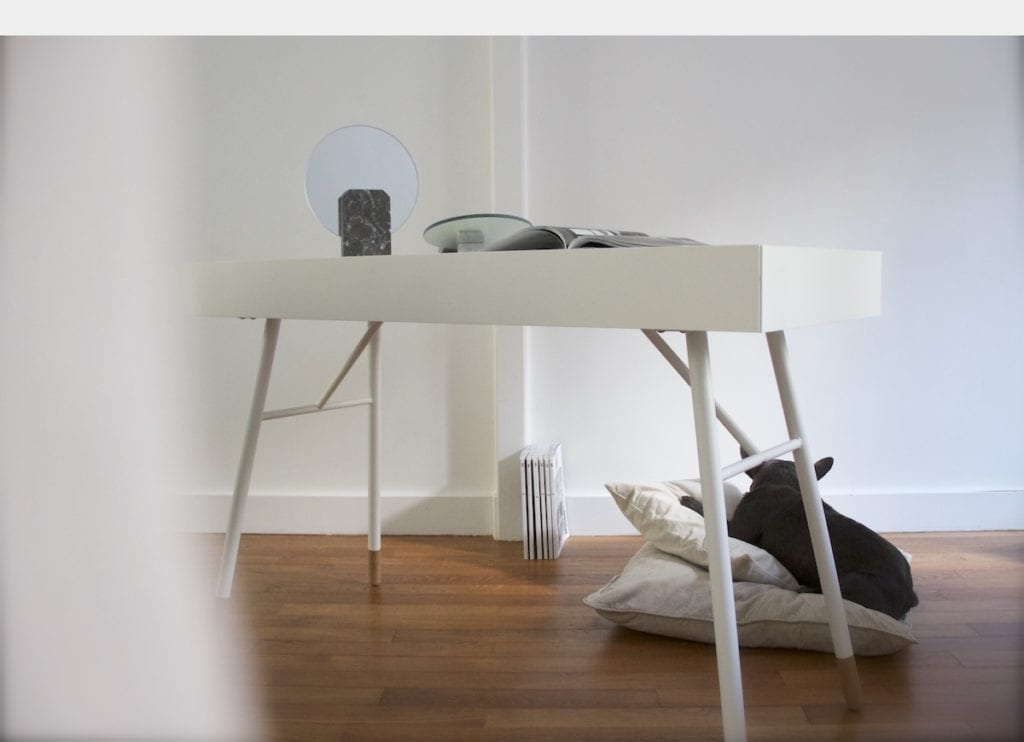 How would you describe your interior style?

I’m still trying to figure that out for myself but I think it’s fair to say that my interior style is very much eclectic. In our space, you’ll find Scandinavian pieces, bohemian touches and modern elements scattered throughout. Living in France has taught me that “Less is more,” so I try to stay as minimal as possible. That also explains why I’m always changing things around. Trying to give it a fresh new look. You’ve seen my IG account. Our home is ever evolving… 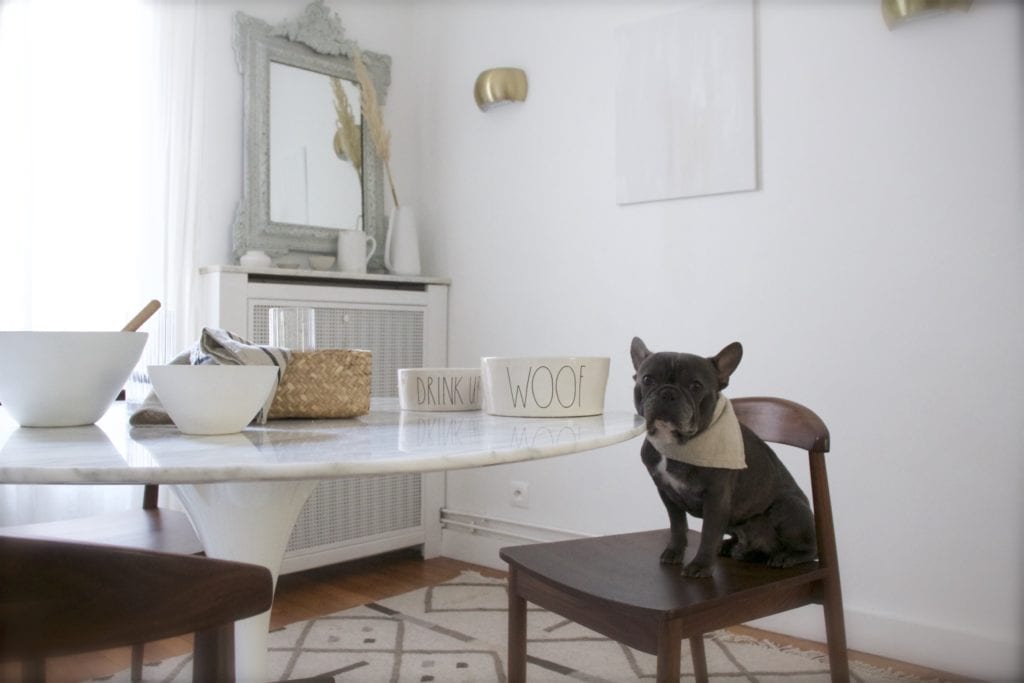 What’s your favorite room and why?

The bedroom! I love lounging on the bed and taking in the bright and warming glow of sunlight. Our flat is located on a corner of two streets and the bedroom brings in the most light. Oui, I’m there oftentimes than any other room. 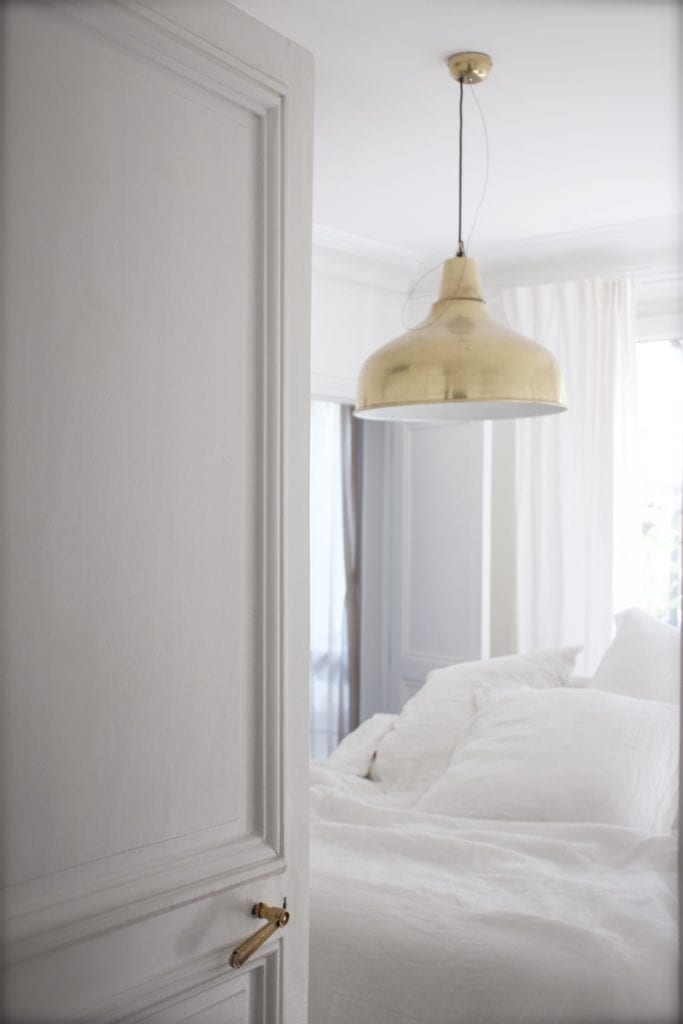 What’s the most personal piece of furniture or decor in your apartment?

That would have to be the mirrors I designed and crafted in both our bedroom and living area. Those hand cracked marble stones adhered to mirrors adds such a personal and sculptural statement for me. Their display always reminds me to continue creating art and really adds a touch of originality space for me. No one in the world will ever have the same and I love that idea. 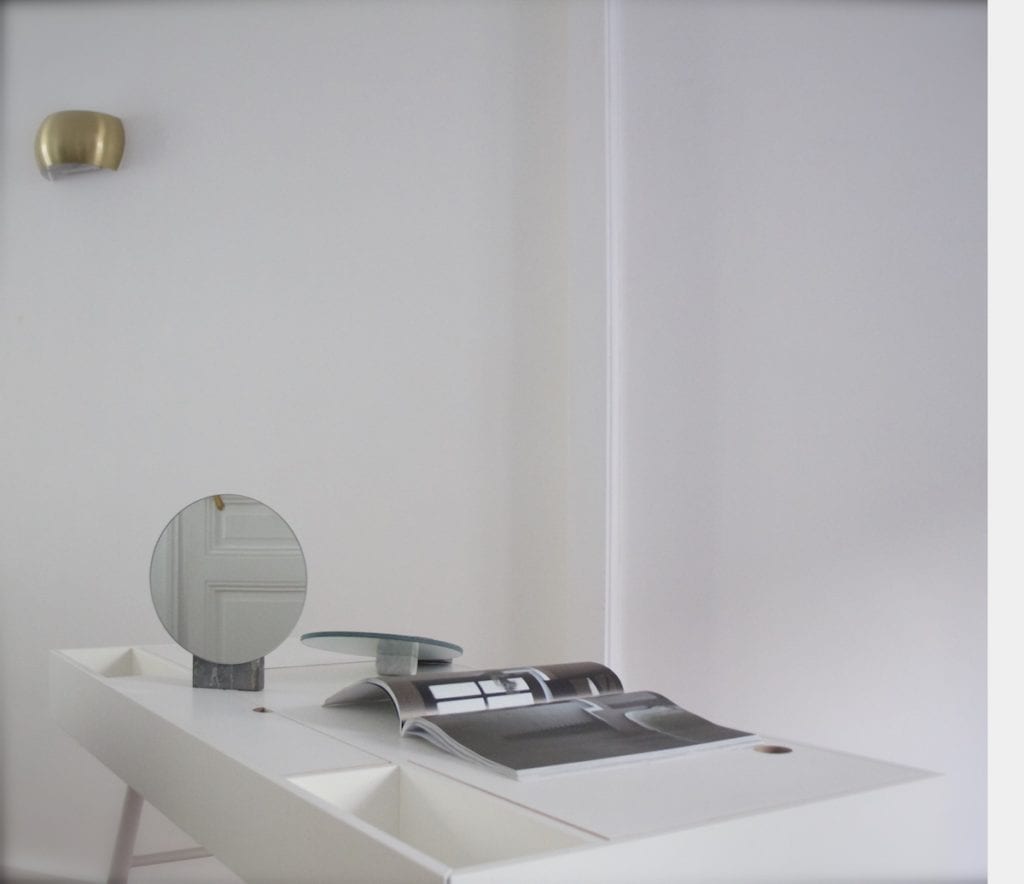 Laffy loves whatever room I’m in but if I had to really say, Laffy really enjoys the bedroom the most. In the mornings just after his by-the-bedside stretches or when I’m laying on the bed, he’s always wanting to get on too. Its such a luxury for him when he’s allowed morning snuggle time or those few times during the month when we permit him to sleep with us at night. He’s loves to burrow himself deep in the blankets and sleep sideways. Thankfully we recently got a bigger bed and now it’s been more comfortable to have him up there with us. Who knows, he may get to sleep with us more often which also makes it more challenging when we don’t allow him up. 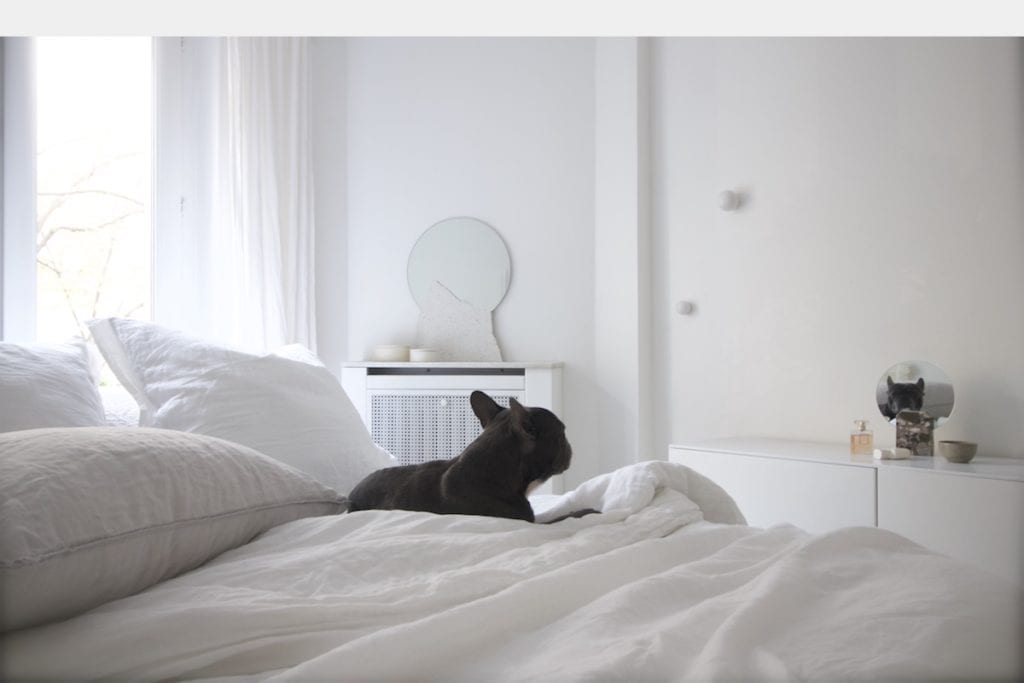 What would you add/change to your apartment if price wasn’t an object?

There are so many things I’d like to change but on top of my list is completing our next project; installing a custom built partition between the living and dining area. I have two particular designs I have saved. One with wood archways and the second would be black/grey metal with tri-folding glass doors. I feel that either look would add an interesting architectural perspective that would not only help break up the rooms but also offer a second bedroom if needed. 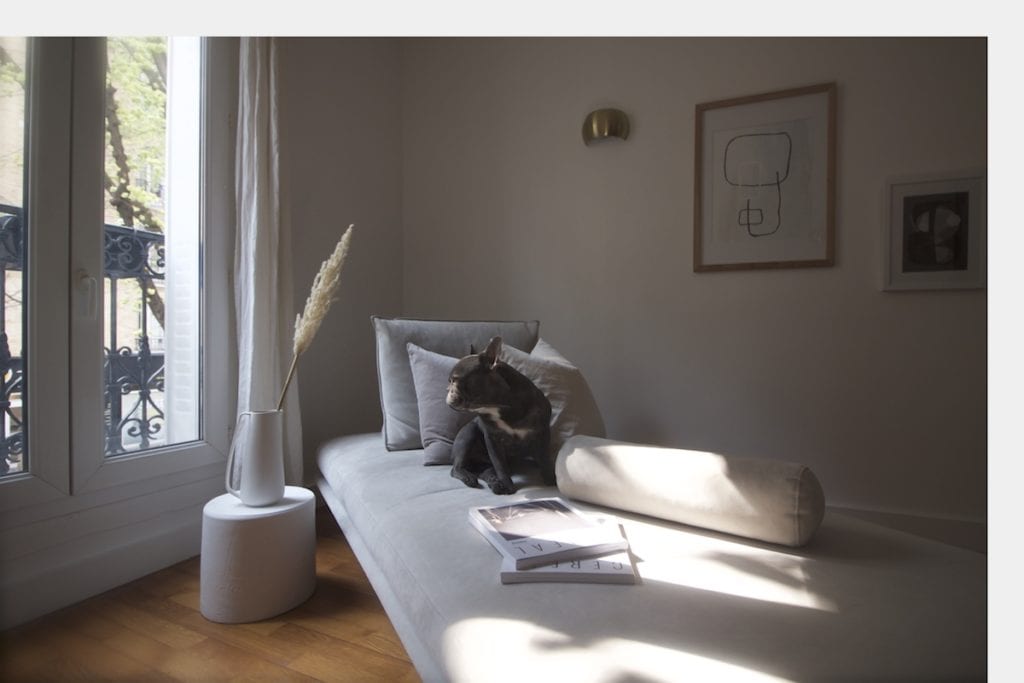 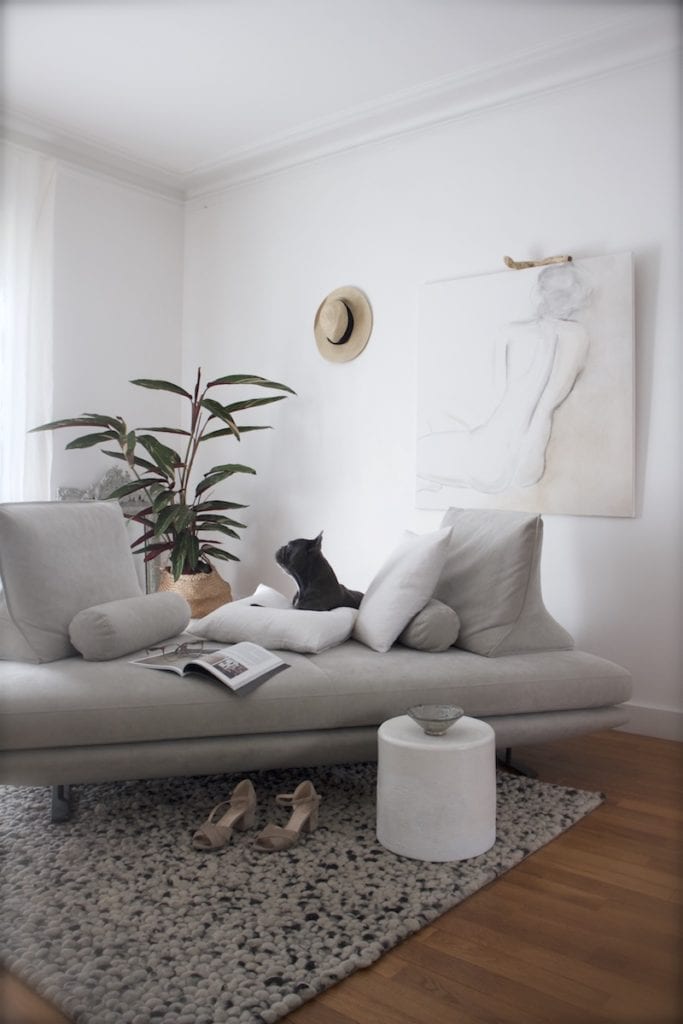 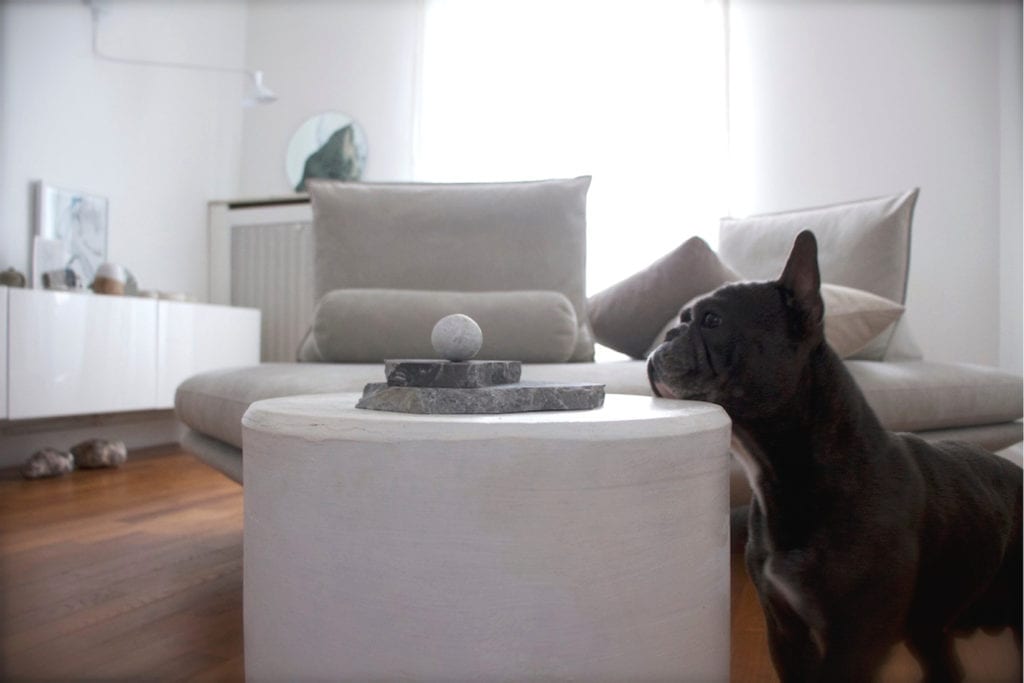 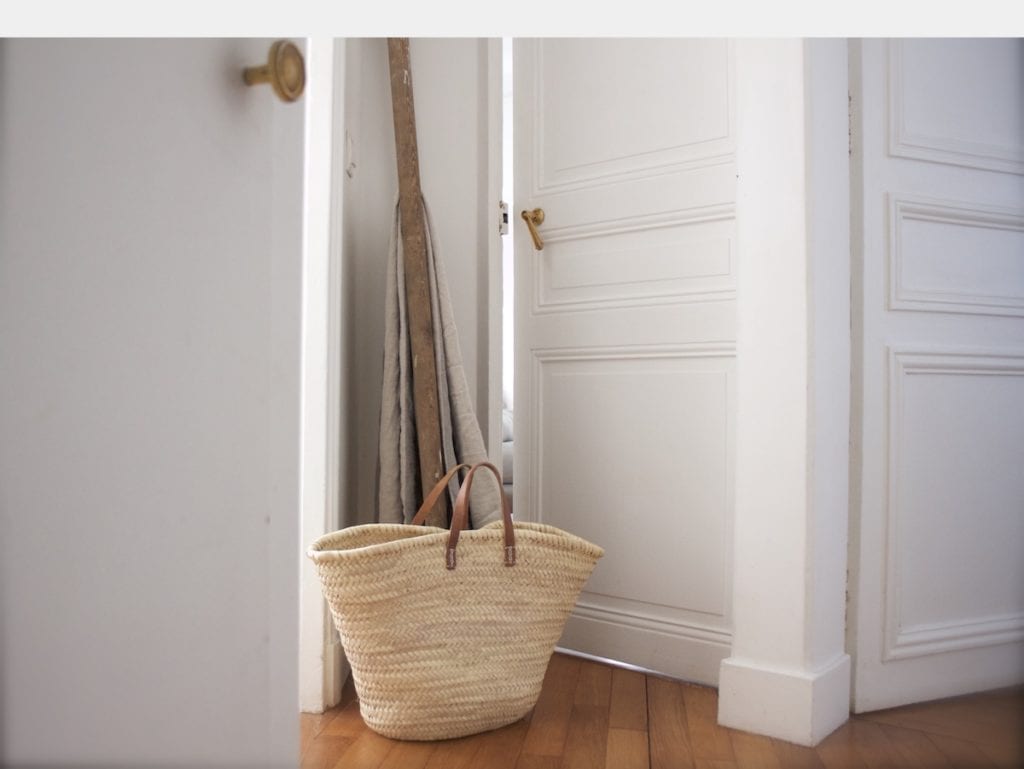 You can find Jeni at @parisandpups and her one-of-a-kind mirrors in her Etsy store.

DIY: Bar Cart For Your Dog’s Storage
The 6 Biggest Surprises Of Owning A French Bulldog