Brushing Your Dog’s Teeth At Home 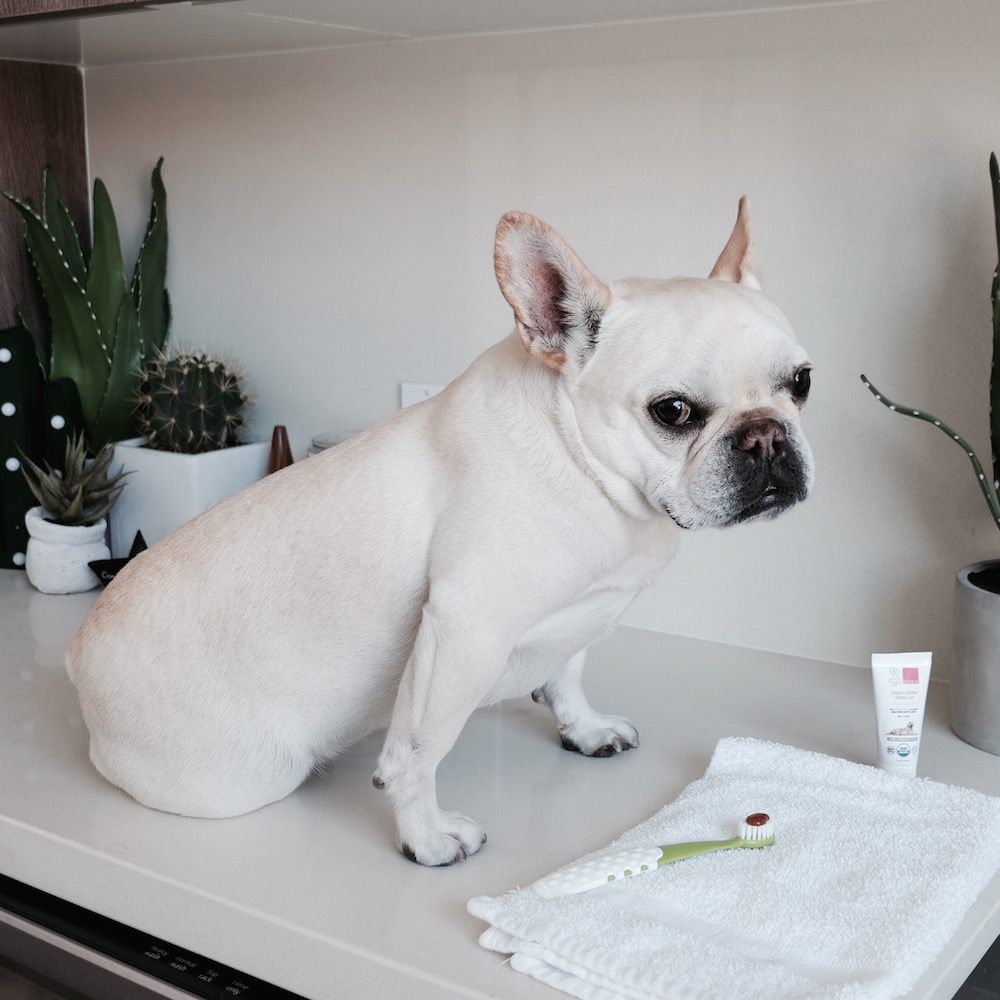 OK, how many of you actually brush your dog’s teeth?

Brushing my own teeth is annoying enough as it is… I’m tryinggg to get in the habit of brushing their teeth more often, especially Weston. He unfortunately had to get 5 teeth pulled two years ago because they were rotting and causing gum disease. It’s common in bulldogs apparently because of their overbite and overcrowding of teeth. After the teeth were removed, his breath smelled SOOO much better.

If you notice your dog has bad breath, red swollen gums, yellow-ish brown tartar along the gum line, or bumps within the mouth, do go see the vet and get it checked out. Your pup could have major infections within the mouth and even loose teeth.

Lately I have been using this new product from Pura Naturals but of course, there are many other brands like Kissable’s combo kit, Sentry’s kit with a 360 degree soft bristle brush head + Vet’s Best Enzymatic kit.

Have you guys seen the RADIUS toothbrushes (for humans!)? They are super wide and help with gum disease protection. We found ours at Whole Foods. We actually use these at home along with a few other brushes (yes, we use multiple toothbrushes because we like to change it up–and also because we end up forgetting to pack a toothbrush, thus buying more). 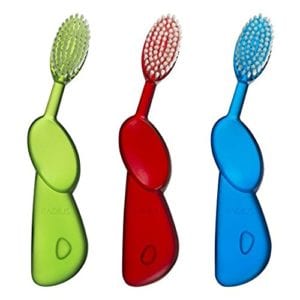 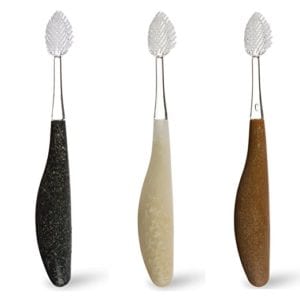 So, a RADIUS toothbrush for dogs? We get to have matching toothbrushes? CUTE.

“We all expect we’re going to feed them and brush them and walk them and give them water, but also part of that should be checking their teeth,” Sommers (Pure Naturals Pet President and Chief Merchandising) said. “And you can certainly get them used to it. Most animals will cooperate, especially if you start them when they’re young.” [ source: PetAge magazine ]

The paste is all organic and made with sweet potatoes + cinnamon! Actually smells really nice. 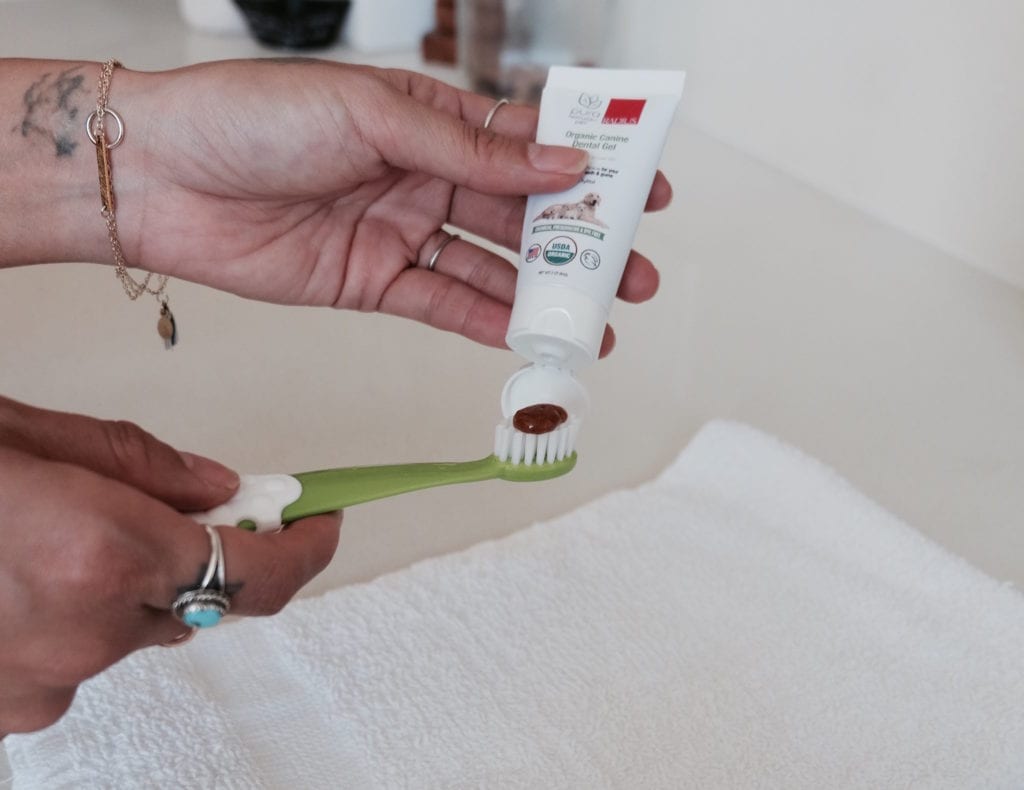 1.) Grab a dog toothbrush with soft bristles or a child’s toothbrush. The best brush is a double headed brush. If this is the first time you’re brushing your pups’ teeth then make it fun for them. Give them exercise first so they are relaxed through this process. Start brushing their teeth as a puppy so they get used to it early on.

2.) Never use Human Toothpaste; it’s poisonous to dogs! So grab some dog toothpaste and give your pup a sample to introduce them to it. Many people even use coconut oil as a substitute for toothpaste (which btw is amazing for our teeth as well! see: coconut pulling) 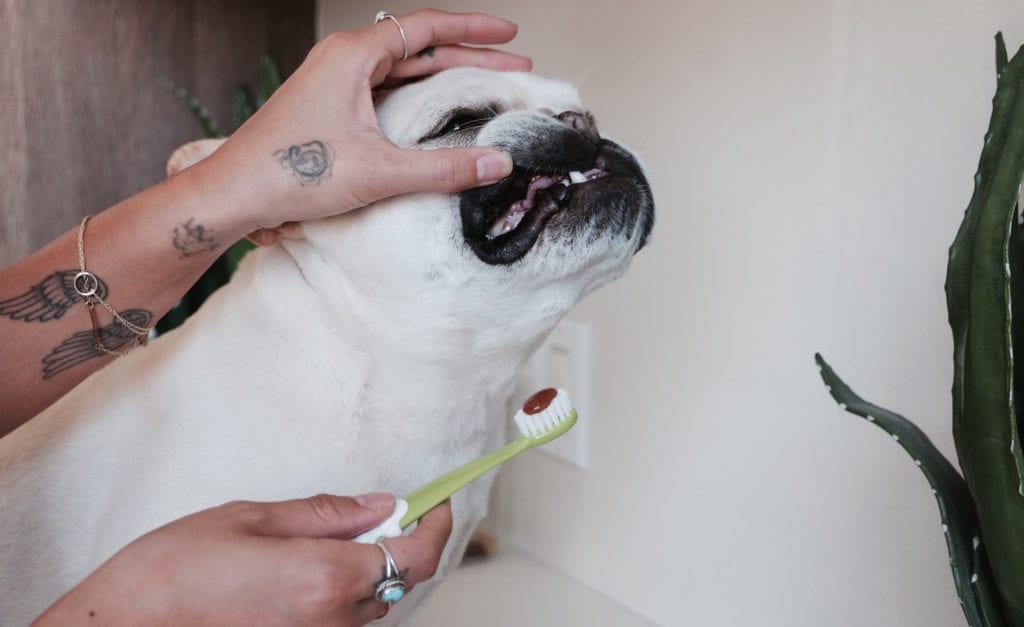 3.) Lift the lip to expose the gums and teeth of your pup and gently brush their teeth how you would your own. Use a forty-five degree angle. Talk to your pup through this to assure them that there’s nothing to worry about. Make sure to get the back upper teeth as they usually build up tartar. If your dog is not used to the brushing then start doing only a couple teeth til your pup is fully comfortable with it. 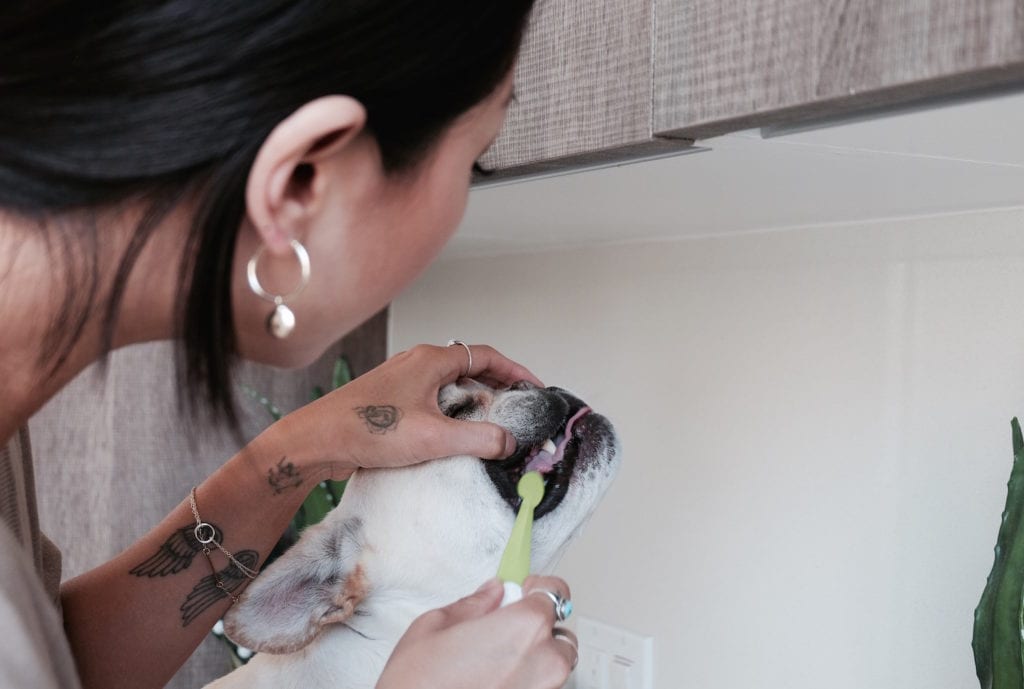 5.) Give your pup some love by petting them or giving them their favorite toy to make them love getting their teeth brushed. Try getting synthetic bones which are better for your pups teeth and gums. Bones are great for pups so they get strengthen the gums and teeth and even get rid of build up plaque. Even getting pets the right type of toy is one way to help combat dental problems.