Edinburgh is a city of many wonderful delights. There are mountains to climb in the center of the city like Carlton Place and Arthur’s Seat, the cafes J.K. Rowling wrote several of her Harry Potter novels in while struggling to make ends meet. And, there are unicorns to find, which is the national animal of Scotland.

When doing research about Edinburgh, there was one thing that stood out above all, The Edinburgh Chihuahua Cafe. Well, this I had to see. Dog pop-up cafes in London were breed specific and we lost interest in the changing policy.  Once I read about it, I found the cafe on Instagram and promptly asked if I could pop by with Elle. The cafe is closed to people bringing their own dogs, as all eight of these tiny divas are trained professionals. There is a dog walking option that can include other dogs, however I wanted to go directly to the cafe and have the full experience so Elle went to have an afternoon nap while I hit the last session of the day (5:30 pm) in full glory. 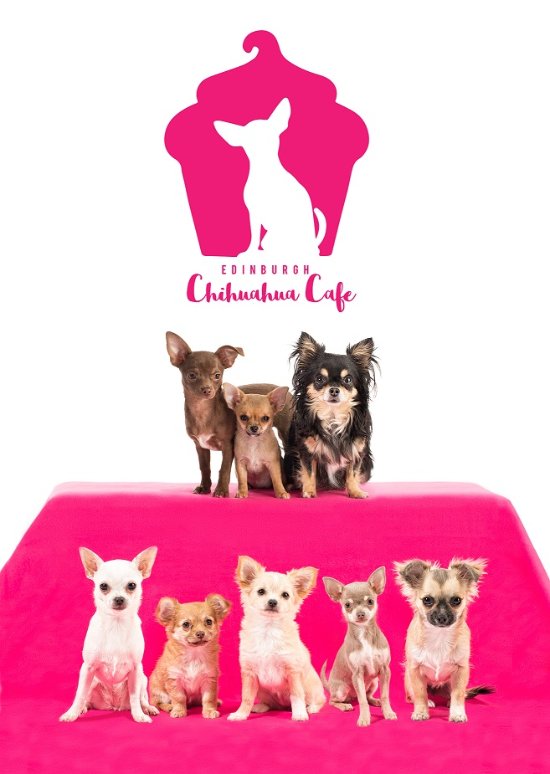 The bright pink cafe is centrally located on Frederick Street, blocks from Edinburgh Castle. Up a set of stairs, the rules were required reading before entering, as I arrived ten minutes late due to traffic from The Fringe Festival. Sorry Tania and Crew. Be quiet, read the rules if you arrive late and wait to be let inside quietly. 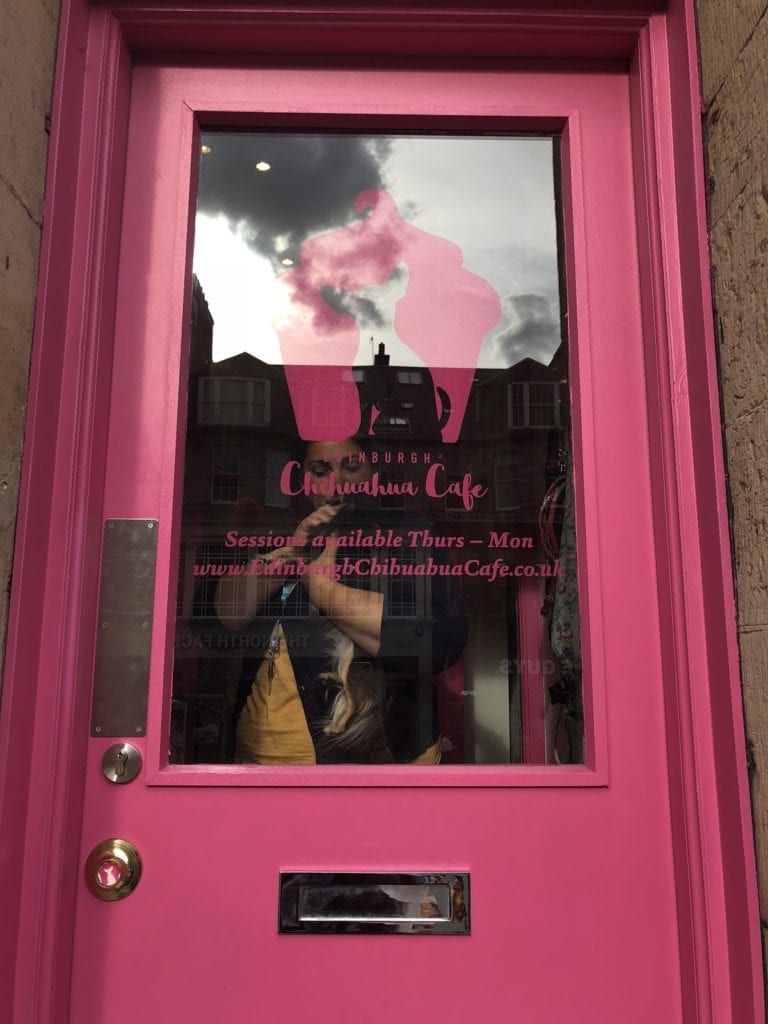 Tanya Salitura was fascinated with Japan’s animal cafes, which include owls and hedgehogs for city dwellers who do not have the space in their flats but enjoy animals. .Once her chihuahua, Ama entered her life, she and her husband decided they wanted to move ahead and be all in with a dog cafe full of chihuahuas. Tania worked for a year training all eight of her pack, who go home at night with her, and socialized them with small pop-ups for six months before the opening in December 2017. 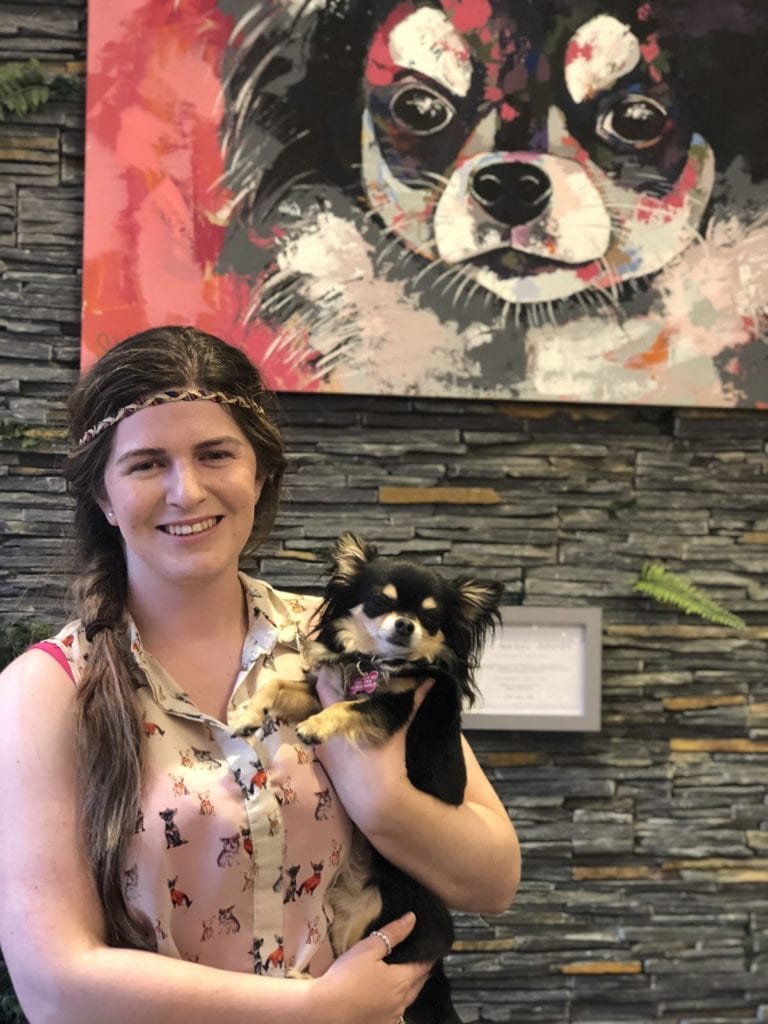 The rules at the cafe came out of necessity and experience. There are eight dogs, which sets the human number right there. Children over five years old are allowed, however this isn’t a babysitting service. Parents are held accountable for a child’s behaviour and especially as the dogs choose where they want to go.

Once inside, none other than Ama, HBIC, curled up in my lap for a cuddle. Sessions are fifty minutes, with long breaks for the dogs. Priced so anyone can enjoy at ten pounds a session, there was a lovely university student who was back for the second time that day she found it so soothing. The dogs like her as well, since three of them had surrounded her for cuddles.

The decor was exactly right with Tania’s idea to create the warmth of a grannie’s living room with glamorous, tapestry printed on couches and proper tea cups and plates. Tania has thought of every detail to make the atmosphere fun, respectful and unlike in America, there’s not strict food restrictions, which means rainbow colored cakes. Uh huh, blood pressure down, pure delight is on tap at this glorious magical place. 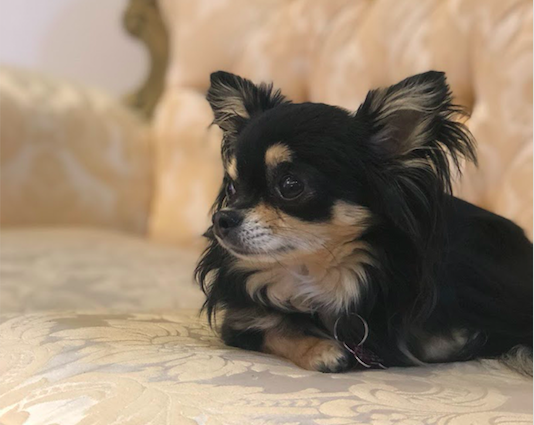 Being allergic to cats, I was concerned there might be a bit of itching for me afterwards. Eight dogs is a lot of dander, no matter how small the pack may be in size. Almost as if Ama read my thoughts, I realized there was no itching at all. She looked up at me as if to say “Darling, do I have to say it?” Bitch, please. Visitors can expect a high level of sass from these tiny darlings.

Each dog has a personality cheat sheet and fan art, loyal customers and merch is readily available. There’s one little chihuahua that had to be included from America, and that was the recently deceased 14 year old rescue wunderkind, @chloekhardoggian. It happens she and mom Dory were one of our first friends we met through Instagram at @barkbox’s first Petsgiving event. I have a few stickers of Chloe I keep in the back of my phone case. Unplanned, I remembered her in the joy of the moment, and was able to place a sticker of Chloe on one of the couches. 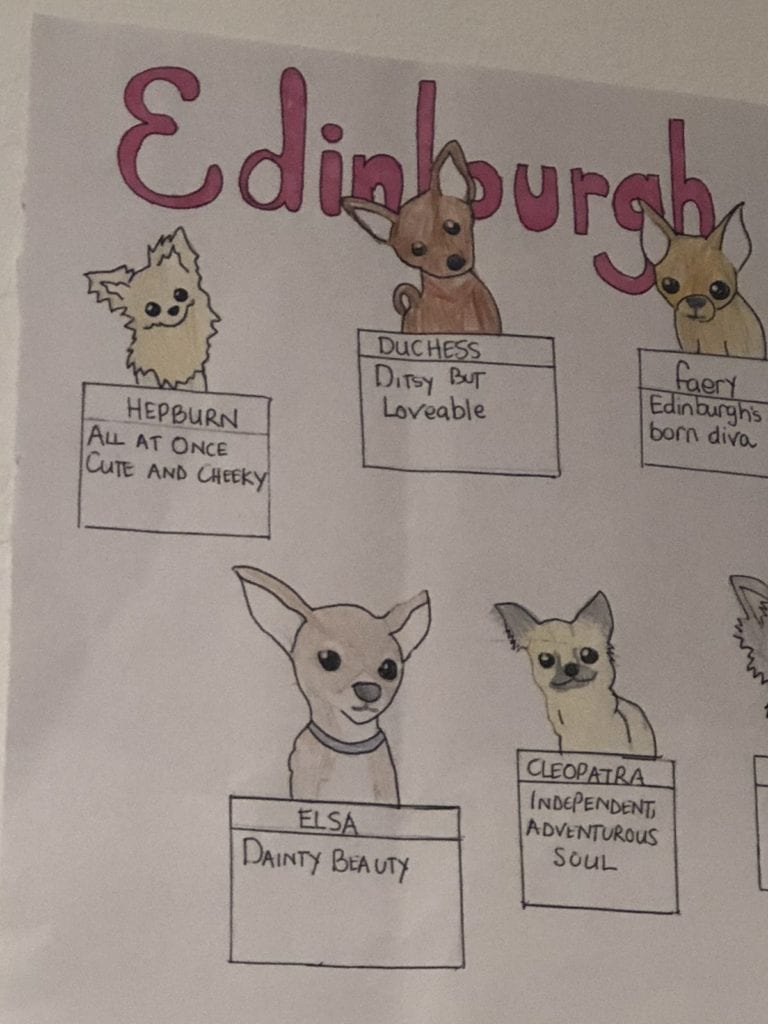 The Most Instagrammable Spots: Edinburgh Edition
Traveling to Scotland from London with a Dog